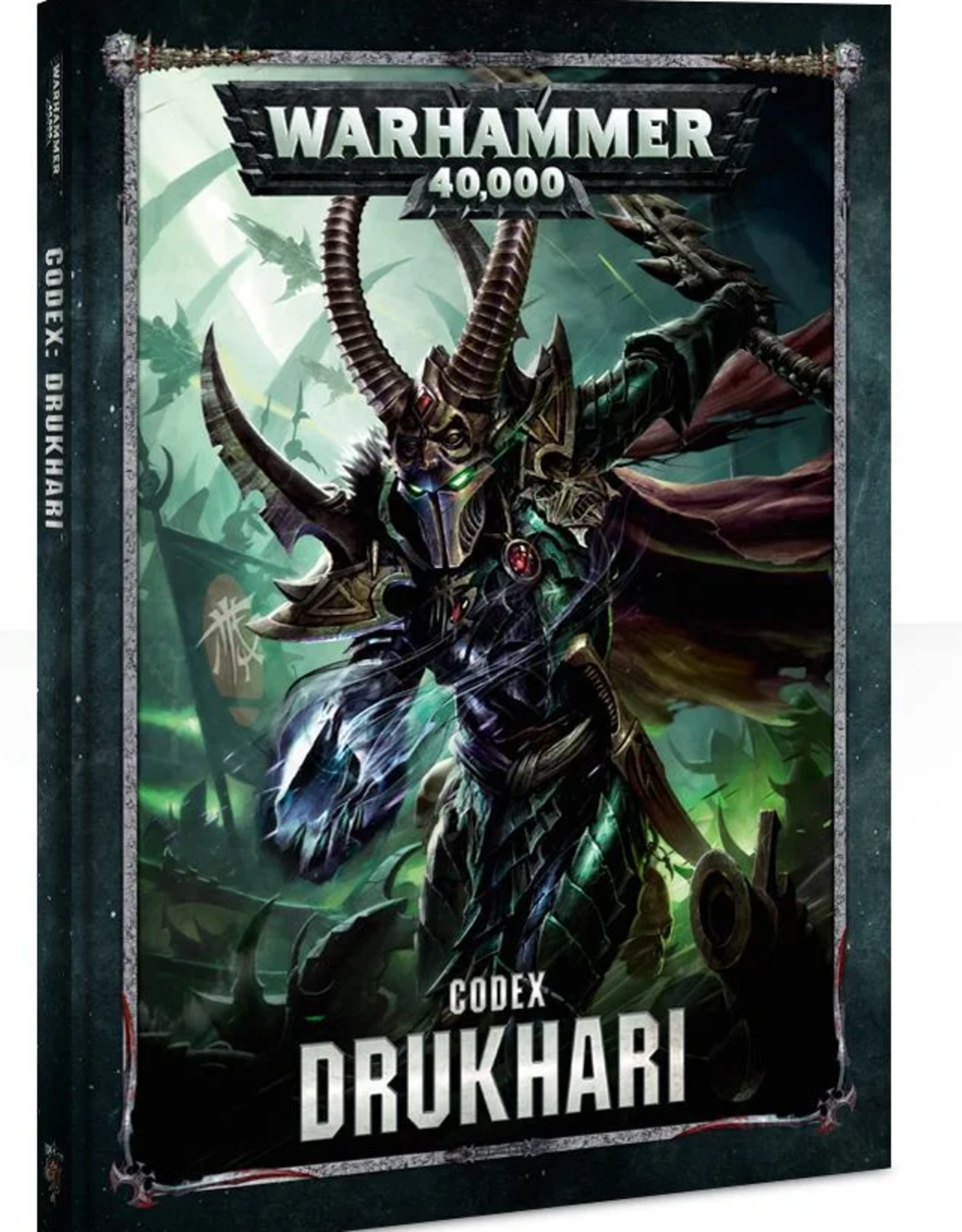 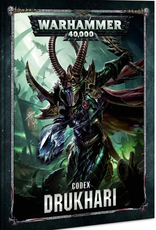 Within this 128-page hardback, you’ll find:

- Dark Origins: the history of the Drukhari from the fall of the Aeldari, their use of the webway and their self-contained realm of Commorragh, and details of their regular incursions into realspace to find fresh victims;
- The Dark City: details of the bizarre, fractal city of corruption known as Commorragh – its structure, outskirts, underworld and defensive abilities;
- Kabals of Commorragh: descriptions of the Kabals – the primary military strength of the Drukhari – and their hierarchies, accompanied by descriptions and icons of the following 8: Kabal of the Black Heart, Kabal of the Flayed Skull, Kabal of the Poisoned Tongue, Kabal of the Obsidian Rose, Kabal of the Last Hatred, Kabal of the Dying Sun, The Lords of Iron Thorn, and Kabal of the Broken Sigil;
- Wych Cults of the Arenas: the composition and organisation of the Drukhari Wych Cults, with descriptions and icons of the Cult of Strife, Cult of the Cursed Blade, Cult of the Red Grief, Cult of the Seventh Woe, Cult of the Blade Denied, Cult of the Wrath Unbound, and Cult of the Pain Eternal;
- Covens of the Haemonculi: an overview of these twisted torturer-alchemists, with descriptions and icons of The Prophets of Flesh, The Dark Creed, The Coven of Twelve, The Black Descent, and The Hex;
- Realspace Raids: examples of the manner in which Kabals, Wych Cults and Haemonculi Covens band together to fight as one;
- Paths of Terror: a galactic map featuring locations of confirmed Drukhari raids;
- A Tale of Eternal Sin: a timeline of major events, raids and battles in the dark history of the Drukhari;
- Background on each unit available to a Drukhari army;
- A showcase of beautifully painted Citadel miniatures, with example armies featuring everything from individual images of models to battle scenes on terrain.

Everything you need to get a Drukhari army primed for games of Warhammer 40,000 is in here:

- 30 datasheets providing rules for every Drukhari unit and miniature;
- Army abilities reflecting the Drukhari’s methods of war on the tabletop;
- Armoury of Commorragh: wargear both ranged and close-combat for use by the Drukhari;
- Points values for all miniatures, weapons and wargear for use in Matched Play games;
- Commorragh Raiders: rules for Battle-forged armies, including:
- Kabal Obsessions: special rules for the Kabal of the Black Heart, Kabal of the Flayed Skull, Kabal of the Poisoned Tongue, and Kabal of the Obsidian Rose;
- Wych Cult Obsessions: special rules for the Cult of Strife, Cult of the Cursed Blade, and Cult of the Red Grief
- Haemonculus Coven Obsessions: special rules for The Prophet of Flesh, The Dark Creed, and the Coven of Twelve;
- 33 unique Stratagems, including 4 specific to the Kabals listed above, 3 specific to the Wych Cults listed above, and 3 specific to the Haemonculous Covens listed above;
- Artefacts of Cruelty: 16 weapons and artefacts available only to Drukhari armies;
- Warlord Traits, with specific Traits for the specific Kabals, Wych Cults and Haemonculus Covens listed above;
- 6 unique Tactical Objectives.